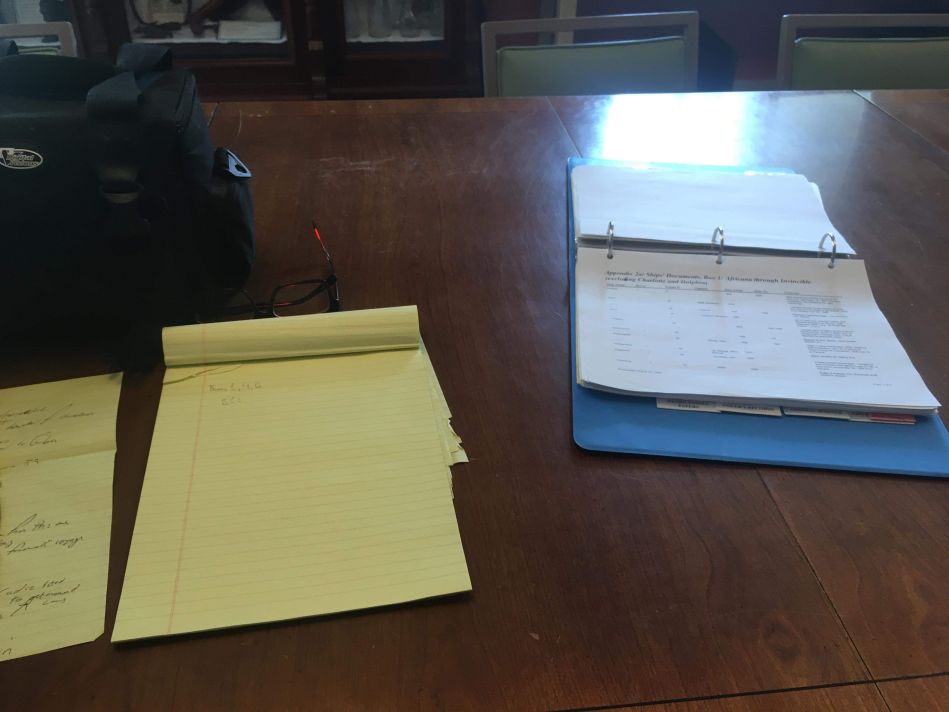 So as you may know, I’ve been researching the institution of slavery in Rhode Island, and more broadly in the northern United States. What started with the grave of Adjua D’Wolf being in pitiful condition grew into the desire to try and flesh out a bit about her life.

I’d read in a few sources that Adjua and her husband Pauledore were “spoken of highly in family writings,” and I set out to try and find them. Unfortunately that’s not panned out as anticipated. I’ve spent a good amount of time at the Bristol Historical and Preservation Society and from what I’ve been able to glean, that they were “spoken of highly” seems to be a case of one source citing another.

In 1959, George Howe published a book entitled, Mount Hope: A New England Chronicle, which extensively covers the history of Bristol, Rhode Island. While I’ve so far been unable to locate Howe’s sources, it seems he relied heavily on local lore and interviews with D’Wolf descendants. Honestly, this is pretty much as valid as such things may be able to get—in the 1950’s, it’s quite possible to have interviewed individuals who had met Adjua in their youth, as she lived until 1874). There has been a very clear intention on the part of the D’Wolfs, and Bristol as a whole, to preserve the positive aspects of the D’Wolf name and slightly underplay the role of the slave trade in building their fortune. This is both horrible and honestly quite understandable, and is also a theme that plays out in the film Traces of the Trade (Tracesofthetrade.org). And really it’s a theme running through pretty much all of historical narratives with few exceptions up until fairly recently.

So with that in mind, it starts feeling fairly homogenized reading Howe. This isn’t so much to criticize his work as without it there would be nothing. I just approached, and came out of reading what I did with it remaining at arms length. That said, I read quite a bit about Pauledore being a community favorite and Adjua being a cantankerous old lady. Pauledore it seems also had a legendary clam cake recipe and more than once turned down offers to purchase it. I read about their marriage and their capture, and despite the sterilized recounting it didn’t seem particularly outlandish or unreasonable to think that there’s a large amount of truth to it.

But looking through literally hundreds of D’Wolf documents, I saw not one mention of any of their personal slaves. One letter mentioned a 12 year old girl in Newport that was potentially available for James D’Wolf to purchase. No name was mentioned and she was the wrong age to have been either Adjua or Judith Honeyman. It’s also not mentioned if he purchased or even met this girl. I found in many letters rather bland discussion of finances and accounting. And in ledgers, I found many accounts of slave trading and purchasing.

It’s that last part that I’m going to get into for a bit here.

Of the dozens of accounts of slave sales, purchases, and captures, I found a strange document that I’ve yet to completely make sense of. But in short, a ship sailed from Bristol, Rhode Island in 1804. It was captained by John Wilson and headed first to west Africa (for obvious reasons) and then to Cuba. In Cuba they sold some of its stock of slaves, but while there also purchased provisions for the remainder of the voyage. These provisions were bartered using slaves as currency.

Some of it is difficult to read because of obsolete measures and abbreviations in addition to the handwriting. But it goes as follows:

4 half barrels of pork

Despite the unclear script and units, all of this was “paid” for with 9 slaves.

9 human lives were exchanged for a night’s dinner and some provisions for the crew of a slave ship crewed with Rhode Islander’s.

While I haven’t nearly finished my research, it’s things like this that really crystallize why it is I’m doing this project.

History has been presented in broad strokes that give an overarching understanding. There’s objectively what happened, there are the topics of common discussion (in this case, slavery) that are explored and presented according to what a given researcher wishes to find out and present. And then there are the colloquial understandings. Those objective occurrences may be impossible to completely recreate, but I believe it’s part of my obligation as an anthropologist to strive for that accuracy, beyond the overarching narrative and how it can color and excite a presentation.

I didn’t find family letters about Adjua, so why rely on glorified anecdote? If I can’t find it, it’s probably not there. If it’s not there, it’s not there. There are enough projects that are flawed when they don’t need to be. Clinging to a narrative or leaving out enough for assumptions to color the story without even noticing. It’s easy to do. Easier than I ever thought it would be going into documentary film making.

And I’ve been criticized both for leaving out what others wanted to see as well as including what tarnished the stories some have grown up with. In both cases, having presented the past according to those preferences would have deviated either from the intention of the film, or the reality of what actually happened. Intention is one thing…a viewer felt I left out certain perspectives based on political opinions. Really the story just ended decades earlier than what the viewer wanted me to discuss occurred, and it simply was never my intention to bring up anything so modern.

Reality is another. I’m not going to leave out the horrible actions of people in the past just because they may be revered. That shows a complete lack of integrity on my part and is disingenuous at best. So where I am, right now, is rummaging through documents, researching historical cemeteries, reading everything I can, and constantly stretching my feelers further out to see if there’s anything else to include. I don’t have the story yet. I’m not writing the story. The story already happened and I’m just piecing it together. Whatever I find will carry the narrative.

I know other projects “like” this exist. There are plenty of more competent researchers than I am who have spent far more time (and have far more funding to do so). But I’m hoping to show this in a more relatable light. Show what people were up to in the thick of these multi century institutions like slavery. On a given day. Such as November 15, 1804, when John Wilson was delivered all of these provisions by Mr. Gibbons in exchange for ownership of 9 people.

I want to make it relatable, and uncomfortably so. That ship departed from Bristol. Where I’ve biked hundreds of times. Where I’ve stopped and enjoyed countless sunsets and breakfasts. Bristol has the longest running Fourth of July parade in the country. Bristol was built, and rebuilt, with the fortune of the D’Wolfs. And the fortune of the D’Wolfs was built on the backs of slaves.

This…wasn’t that long ago. Well…this document was quite some time ago. But in 1959, George Howe published his book that was written in part by speaking to people who knew Adjua and Pauledore. Taught him a family nursery rhyme about the two of them. Who knew the year they were captured and the ship they were on. Who knew what tribes they were originally part of—and that they weren’t the same tribe. And knew that, being “privileged” slaves, they had the letter “P” branded onto their cheeks.

And these people were Rhode Islanders. They loved the same streets and same cities and some of the same sights. These aren’t things we experience, but they’re still here. The things they said and did are still written. Their graves are woven into our own streets.

It’s before any of our time. But it’s not so far removed

2 comments on “History has a Life of Its Own.”

To kick off what's inevitably gonna be a whole lot of European history that winds up spanning like 35,000 years, today we visited our first (of twenty!) castle in the city of Leipzig.
With my author copies of #thecastironfieldguide finally here and the bulk of the moving prep behind me, I can finally get orders out. I don't have a million of these, and I've been really amazed at the support and excitement that's rallied behind this book. I can only hope everyone who gets one will enjoy it as much as I enjoyed putting it together.
Starting to feel this like I used to. We are actually finishing things up here in the states, with all our non-luggageable possessions being shipped the day after tomorrow. We fly away exactly two weeks later.
Ok Amazon moved #thecastironfieldguide from the Americana and collectibles section to History and Education. It's now no. 3, just under Lies My Teacher Told Me and The Art of War. Maybe people are actually buying my book?
I didn't know this was gonna be a thing but apparently #thecastironfieldguide is numbers 1 and 2 in new releases, because the print and ebook are separate. This is cool. I doubt I'll be getting rich off this but if it gets me several pizzas it'll be emotionally worth what I spent on my degree.
Yall #thecastironfieldguide has jumped to no. 6 overall best seller in Amazon's Americana and collectibles section. There's still a lag with updates but this is awesome and I hope it hits 1 for at long enough for me to take a picture of it
Loading Comments...
%d bloggers like this: