A million years ago, when I was just starting my degree (2010), our recent (less than 300,000 years old) family tree was pretty sparse. There was us (Homo sapiens), the Neandertals (Homo neanderthalensis), and the little dudes we colloquially call the Hobbits (Homo floresiensis).

Just three. Right around that 300kya cut off there was Homo heidelbergensis, with whom we didn’t spend a ton of time and who is thought to have given rise to the Neandertals. So technically we can push it to four, but I don’t wanna go too crazy. I’ll talk about H. heidelbergensis in another post. There’s plenty of time for that.

We’ve talked about the Neandertals before, and so I’m not going to say much of anything about them here, except that they’ve been given a bad rap by history. They were a lot more like us than we previously thought. And also, my spelling of Neandertal isn’t a typo. Neander is a valley in Germany. Tal is the German word for Valley. Neandertaler is the German word for Neandertal–people from the Neander Valley. In the 19th century, when the first Neandertal was discovered, Tal was spelled Thal. In modern German, that h is dropped, and so the spelling is starting to reflect that.

Both are right. I just tend to use Neandertal and also wanted to drop a little bit of linguistics in there.

But anyway. Enough about Neandertals and their immediate ancestors.

The hobbits, H. floresiensis, were discovered in 2004 (whaaaat?) in a cave on the Indonesian island of Flores (Flores, floresiensis; Neandertal, neandertalensis…see the pattern?).

Now obviously it’s really big deal when a new species is added to our genus. We like to be the only ones. Look at what we did to Neandertal! We made them out to be the biggest idiots ever, but turns out they were making art before we were. We have pretty big egos.

They were a pretty long-lived species. The oldest of the fossils found date back to about 700,000 year ago. But the most recent remains are just 50,000 years old! 650,000 is a long time to be around. That’s more than TWICE as long as our species has been around. We can’t really brag about how awesome we are when we’re about to destroy the planet while our closest relatives lasted twice as long as us using sharp rocks.

Their classification was so hotly contested that there have been a lot of studies done on them. They’ve ruled out other genera, and they’ve ruled out a pathological population of modern humans. Future DNA extractions may shake things up some more, but for now, they are firmly accepted as our cousins.

Getting back to Neandertal for a couple of sentences, there were several teeth, a finger fragment, and a fragment of either an arm or a leg bone found in the Denisova Cave over in the Altai mountains in Siberia. These were attributed to Neandertal because at the time they were discovered, who else could they be? What could be identified wasn’t modern human, and so what was associated with them wasn’t assumed to be.

Well. Turns out there’s this Paleoanthropological Sorcerer named Svante Pääbo who, along with his team of other sorcerers at the Max Planck Institute for Evolutionary Anthropology in Leipzig, Germany, developed some really incredible spells….er…techniques for extracting ancient DNA where it was previously thought none could be found.

They wound up testing these teeth and fragments in their Neandertal Genome Project and, whoopsie daisy!, it turns out that not only are those bits not Neandertal…they aren’t modern humans either!

Ok so this was unexpected. It was assumed that these were Neandertal specimens. But you can’t argue with the DNA, and this DNA was unlike anything found before. There was no other option but to designate this a new species based on these teeny little bits, because DNA is DNA is DNA.

We don’t know a whole lot about the Denisovans. In fact, we’re still working out the exact taxonomic classification, but Homo denisova is one that works for the time being.

One thing we do know, however, is that they possessed some really nifty gene sequences. One that had previously been unique to modern Tibetans and that allows them to breathe comfortably at higher altitudes. Another is found in modern day Inuit populations in Greenland, and is related to body fat distribution and is an important adaptation for surviving in extremely cold climates.

Turns out that early modern humans knew they Denisovans pretty well, and we’re still reaping the benefits of the dates they’d go on together.

And now, just a week ago today, it was announced in the journal Nature that our family is getting a wee bit bigger.

A team of researchers working on the island of Luzon in the Philippines has described yet another small-bodied hominin from Southeast Asia.

Dubbed Homo luzonensis, this species lived as recently as 50,000 years ago, meaning they had a considerable overlap with us, and our cousins mentioned above.

There isn’t a whole lot of luzonensis to go by–just several teeth and small bones. But what has been found sports the typical mosaic of features–some ancestral and primitive, some more modern–that we expect to see in earlier members of our genus. The older, the more primitive. 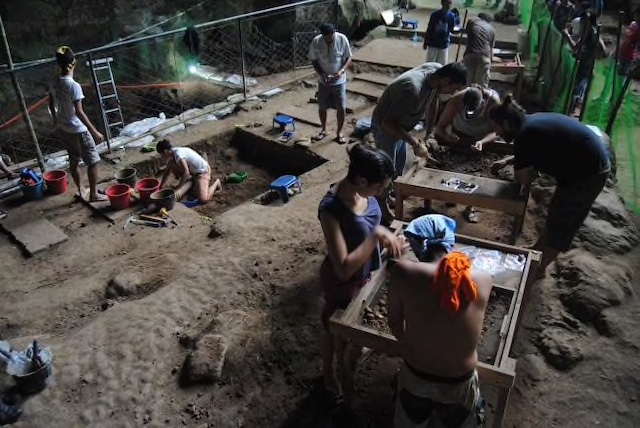 These islands are not easy to get to, meaning whoever these people were, they weren’t stupid. The initial finds were dated to 67,000 years ago, which if these were small-bodies modern humans, it would be the earliest evidence of our presence in the Philippines.

But these aren’t small-bodied modern humans. So let’s go through the possibilities for this critter, before it was classified.

•It is a small-bodied modern human, perhaps pathological.

•It is a small-bodied member of another species within our genus, some of which were known to have made it into Asia.

•It is a member of H. floresiensis.

•It is a new member of our genus.

•The Australopiths not only survived until waaaaaaaaaaay more recent times than ever expected (The genus Australopithecus died out around 2 million years ago), but they also apparently used complex tools and probably made boats and got to the Philippines before we did.

•It’s none of the above and it’s some kind of large monkey or small-bodied ape and we need more information before making the call.

Ok well first of all, we know a lot about ourselves, and about H. floresiensis. These teeth don’t fit. Notably a pre molar has 3 roots, where that isn’t seen in floresiensis and is incredibly rare in modern humans.

However, the teeth are smaller than in earlier Homo and Australopithecus, which suggests a more modern evolutionary form.

We’ve also found a foot bone that more closely resembles Australopithecus than modern humans in that it’s apparently adapted for bipedal locomotion; however, is less efficiently so than we are.

Going off the handful of remains found, it isn’t H. sapiens (pathological or not) or H. floresiensis. The evidence from both teeth and feet suggest it’s not likely an earlier member of our genus or any other known primate, either.

To be clear, there isn’t a whole lot that was found. But also to be clear, they have been studied as meticulously as possible by top experts in the field. We really would have a hard time knowing more that we know until more fossils are found.

But to me, that’s less important in some ways. I’m going with it being a new member of our genus. But so what if it isn’t? Either we had a bigger family tree than we anticipated, we made it to the Philippines a lot earlier than previously known, or the Australopiths lived well into the last ice age.

What it does tell us is that Southeast Asia needs a lot more attention than it’s gotten from paleoanthropologists in the past. There is so, soooo much more where this came from. I would stake the $40 I’ve made from Patreon on it.

In the coming years, expect a lot more buzz surrounding our ancient relatives in Southeast Asia and in general. Technology is advancing in leaps and bounds, and so much of the ego of previous generations of researchers is being dropped in favor of new ideas (and new egos, lets be real here).

I for one can’t wait.

0 comments on “And Then There Were Five”

Some months ago I found an astounding piece on Etsy. Despite being heavily painted over grime it was immediately recognizable as a mid 19th century kettle made in Albany, New York by few possible makers.
One big aspect of #thecastironfieldguide is the appendices. Along with a whole lot of patent information, there's also several DIY recipes, including food safe crack repair cement and now stove polish. I looked over a whole mess of 19th century stove polish recipes and put one together with food safe ingredients so you can black your stoves and pans without crummy water based polish that leaves flash rust, comes off too easily, and isn't food safe anyway.
Very deep into formatting the new book. First few chapters are "done," meaning formatted and only a few sections are in red and have to be reworked. A lot of work to be done but a lot of the page layouts are incredibly satisfying and allow for comparing similar pieces.
Is this ever not the worst part?
Weird to think that it's already been four years since the industrial revolution project. I wasn't the biggest fan of it, but we had some good times and it financed Anthrospin gear upgrades for a long time. There are a lot of copies of this and #pedalforpongo and I hope to clear a lot of em out before the move.
We are hard at work on the new book! Getting close to the home stretch now. It's good to be working again.
Loading Comments...
%d bloggers like this: