It all started with this guy named Plotinus, a philosopher in the mid 200s (not a typo), who was born in Egypt, though a Greek speaker who was heavily influenced by Plato and Aristotle.

Plotinus built on Aristotle’s idea of there being a continuous gradient of complexity in animals in describing a concept of a perfect being who wants and needs nothing because it is perfect. From this being descends all other beings of various biological complexity and relative good and evil.

This concept was built upon by medieval scholars who introduced a religious component–namely that the perfect being was inherently their god. From this god descended all forms, from angels to humans, humans to wild animals, down to plants and fungi, and even the most insignificant grain of sand. All of these existed on what they called the Scala Naturae–the Chain of Being.

“Scala” technically refers to a ladder, but whatever, nobody’s perfect and the Great Ladder of Being doesn’t have the same panache.

The concept of a “chain” really lets one think about the overlap of species, and with early theories of evolution the immutability of species, and by extension the Great Chain, was beginning to be questioned.

The term “missing link” started popping up by the middle of the 19th century, when Charles Lyell used the Chain of Being as a metaphor for the geological record, with “missing links” as a way to describe gaps in our knowledge of the geological continuum.

The idea of a missing link was quickly adopted by biologists and paleontologists to describe transitional fossils–those fossils which represent a “transitional period” between one organism and the next.

That idea, and honestly the entire chain, was tossed out by science by the early 20th century. But people love their neat analogical tools, even when they’re really not very neat at all and are honestly kind of total garbage.

You’ve definitely heard of the term missing link. I refuse to believe you haven’t, and not just because I’ve used it several times in this post you’re reading right now.

It’s been used to refer to all sorts of fossils, particularly of human ancestors. Neandertal was considered one. Homo habilis and H. erectus were others. When discovered, we didn’t really know what the heck they were or how they fit into the natural order of things.

Enter why I (and science as a whole) loathe the term.

It just allows for the perpetuation of misunderstandings about evolution and how it works, as well as kind of completely undermining the possibility of understanding our deep ancestry.

You see, “missing link” implies some kind of linear progress. An origin and a goal. But it’s really not that neat. It’s not close to that neat or even close to neat. Zoologist Richard Dawkins said “surely everything is in transition to something else,” and I don’t know if he really thought that line was particularly profound when he wrote it, but it stuck with me.

Evolution requires time and barriers. Barriers to reproduction and time elapsed during the existence of said barrier. Given enough time, there’s at least a decent chance a population that was separated either can’t or won’t reproduce. 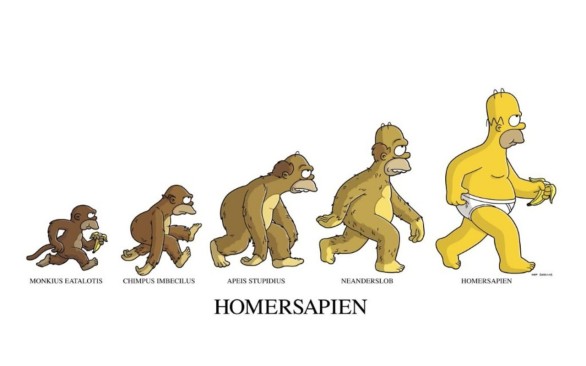 You’ve seen this image. The Evolution of Man. That’s a big part of perpetuating the missing link nonsense. You’ve got Homersapien there. Pull out Neanderslob and you’re missing a big link on the way to Chimpus imbecilus.

Sure we’re super complicated and really dependent on our tool use and culture (I’m gonna order a pizza with my cell phone once I’m done complaining to the internet about outdated models of nature). We aren’t really fast or really strong. We aren’t the best swimmers and we definitely can’t fly. But we make tools to overcome our environmental obstacles, and that’s a trajectory set upon by some really distant ancestors.

Ancestors that gave rise to other lines of tool using critters that were a lot like us! And a lot like the lineage that would go on to become us. But they were dead ends.

Take a look at that chart. I know it can be kind of overwhelming if you’ve never seen one of these. It’s more or less a family tree.

You can see us up near the top right. Go back a bit and we meet up with our cousins, the Neandertals. Go back a bit further and we’ve got some more cousins. Some dead ends, some led elsewhere.

Go back a while mess of time…somewhere between 5 and 7 million years, to be exact, and you get the critter that would go on to give rise to chimps.

I find it mildly ironic that my post complaining about presentations of evolution as linear models shows chimps as a straight line for 6 million years.

But it’s just there to show you how long ago we actually shared ancestry. Back then, that lineage that gave rise to us was clearly not human. It also wasn’t chimp.

And so there’s no “missing link,” because there’s no chain at all. Analogies and metaphors are really nice, but despite the fact that 94% of what ever comes out of my mouth being analogy, I really kinda wanna do away with them altogether when it comes to something like science.

It’s been formally out of favor in scientific communities since the early 20th century. But I’m still seeing–on a weekly basis–popular press articles about science that talk about some missing link being found.

It’s kind of depressing because even though I “get it,” I also kind of hate it.

So while this post isn’t going to change the mind of the pop-science media market, hopefully a few sets of eyes that find their way here will keep it in mind. It’s a nifty way to explain how a newly discovered or described fossil answers some questions about a time period in our (or another critter’s) evolution.

But it stops there, and I’ll be glad when it stops altogether.

0 comments on “Why I Won’t Miss the Missing Link.”