We’ve covered a lot together in the last year and a half. All four subfields of anthropology, a heapin’ helpin’ of the American Industrial Revolution, shipwrecks, wrecking ships, and how neat stories can be told from studying bits of garbage. We’ve talked about why the study of evolution is important to anthropology and how understanding our closest relatives can let us know more about ourselves and where we fit in in the scheme of things.

You know what’s up. Or at least, you know what I’m talking about. Which is more than I can say for myself many times. You’ve got a good reference point for the kinds of things Pedal Powered Anthropology talks about and if nothing else, you’ll be familiar with the concepts and topics. You’ve got a foundation.

So in this blog (will I ever not hate that word?) I want to talk about natural selection. Or rather, I want to give a common but kind of under-appreciated analogy of natural selection to sort of help bridge the gap of understanding that’s a little bit too common.

Darwin is credited as being one of the discoverers of natural selection. He wasn’t the only one, and he wasn’t the first. People commonly say he discovered evolution, but it seemed apparent that evolution was going on for a while. His genius wasn’t in noticing that it happens, it was in describing the mechanism by which it occurs.

Boiled down, his theory of evolution by natural selection says that if you’re well-suited to your environment, you survive to reproduce. If not, see ya! Sometimes conditions exist in an environment that can be exploited. If the variation within a species (genotype) winds up being expressed (phenotype) in a way that happens to exploit that condition, that species gets an edge. Given enough time species can become quite different from one another, with some superficial though usually recognizable resemblance to a common ancestor.

Let me break that down.

A prime example is Darwin’s Orchid. This orchid has kind of an obnoxiously long spur (where the nectar is). 35 centimeters deep. That’s more than a foot long.

This was kind of a big deal at the time. Because…orchids need to be pollinated…by some critter that can reach the nectar. Darwin was somewhat ridiculed at the time by predicting in 1862 that a moth with an equally obnoxiously long proboscis would have to exist in order for this freak of nature to also exist.

Basically it goes like this. A species has a range of variation. Orchids can have different length nectar spurs, but thrive best when their pollinators can get to the nectar, while others cannot. Too short and you’ll get raided. Too long and nobody can eat it.

Similarly, the moths with a longer probosces can reach deeper nectar. But too long is useless, and potentially dangerous when it comes to predation.

It worked out at some point that a moth or group of moths were a bit better endowed, and happened upon orchids that were pushing the boundaries of spur length. Moths equipped to reach the deeper food source got a food source that was unlikely to be eaten before they got there. They survive, the orchids now have a reason to be so obnoxious.

Kaboom! This is called convergent evolution–the notion that one species’ evolution can be affected by another.

Also that moth that Darwin predicted was discovered in 1903, meaning he didn’t live to see his prediction come to fruition.

Anyway so that’s how natural selection acts blindly on organisms to shape them to their environment.

Back in 1976, zoologist Richard Dawkins described a concept of sort of non-biological evolution. A way for cultural phenomena to replicate and evolve. The evolution of ideas.

Fashion in clothing, popular music, spices in foods. The ways these ideas spread and change are what he sought to describe. Think of the game Telephone. You start with one idea, and through no specific intention to change it, it winds up completely different by the time you get to the end of the line.

He coined a word to describe it. What was it? Meme. No joke.

That’s right. You know them as those viral internet images that are hilarious and sometimes stinging. They have their roots in the late 70s, directly coined by an Oxford zoologist who was inspired by geneticists, anthropologists, and ethologists in coming up with it.

But think about it. You have an image that doesn’t necessarily mean anything. Condescending Wonka, Condescending Spongebob, Neck Man, Bob Ross, Surprised Pikachu. 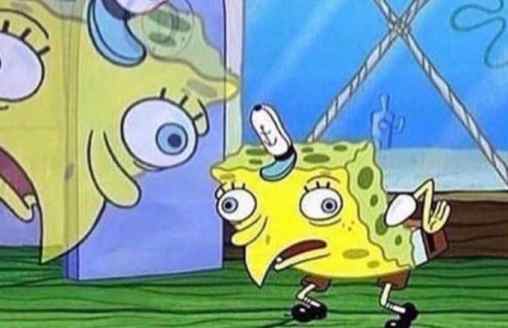 Chances are you had images in mind when I mentioned those. The images themselves mean nothing, but they serve as a way to transmit ideas virally. The image becomes associated with the ability to transmit these ideas and so it’s preserved as a nongenetic replicator. A meme. Biologically the unit of transmission that’s subject to evolution is the gene. The study of genes is called genetics.

Is there a study of MEMES!? Yup. It’s called memetics.

As Dawkins originally intended it, it would be any cultural concept. Socrates may not exist any more biologically. He may have no ancestors or way of knowing if his ancestors ever existed. But Socrates in a sense still exists through his complex of ideas (called memeplexes!!! this is a really thing!) and as such can go on influencing people for thousands of years after his death.

So something, in this case an image, is well-suited to its environment and can survive well into the future because of its unexpected ability to adapt and convey information. Future generations may be unrecognizable in content to the original, but they’re all tied to that original image.

Remember that paragraph right before the example of the orchid when I broke down natural selection and talked about variation and environmental exploitation? Well, the entire concept of those meme images is a near-perfect analogy.

No…it’s not perfect perfect, culture exists due to human intellect and implies intelligence whereas natural selection not only implies no intelligence…what we see in nature almost makes no friggin’ sense at all if you consider it to be the product of intelligence. In Evolution’s Place in Anthropology, I get a bit more into that.

So the analogy isn’t flawless. But I think that the general public has a pretty good understanding of the viral reproduction and mutation of memes as we understand them on the internet.

Expand that to cultural ideas as a whole. Covers of songs, popular hair styles, cool shoes. They all change over time as a population unconsciously and collectively shifts its preferences. All memes. All evolving.

Even meme is its own meme because memes as we popularly understand it is a memetic evolution of the original concept of a meme.

Natural Selection works in a pretty similar way. Memes may make you think of an image. And idea gets attached to that image just as a species is made up of genes.

The suitability of a meme’s ability to transmit cultural concepts determines its reproductive fitness.

The suitability of a gene’s ability to transmit genetic material determines its reproductive fitness.

The idea of the meme neatly pares down the concept of natural selection. It’s readily understood by pretty much everyone. And that’s particularly useful in a country in which an astounding 34% of adults reportedly do not accept that evolution occurs and in which school systems have decided to “teach the controversy,” when scientifically, no such controversy exists.

So while it’s not perfect, it sums things up pretty well and can help some people explain or wrap their head around a concept that may be tough to articulate or digest. I’m okay with that.

Instagram trimmed the captions but hopefully you can all follow along.
Went to @rwpzoo for the first time since #pedalforpongo and saw lots of old friends.
Linguistics time!
Tiktok has been pretty great for short little blippy stuff like this. If you’re on there, follow me @anthrospin.
Getting back into research that’s been on hold due to covid. I’m gonna be picking through materials and sharing tidbits like this one as my brain works on not being smooth anymore.
My settings say this video was supposed to save with captions. It didnt. But I’m still excited about #lumafusion video editing app
Loading Comments...
%d bloggers like this: