Anthropology is referring to as a “holistic” field, in that it takes objects and concepts and situates them as part of an overarching culture. The keyboard on which I’m typing this is uniquely tied to my culture. The German-language keyboard I have set aside for…well..typing in German has overlap, but is pretty distinctly different in critical ways. German keyboards aren’t QWERTY keyboards; they’re QWERTZ. They’re very similar, but reflective of the cultures in which they’re developed.

The same goes for everything ever.

It’s common in 100 level anthropology/archaeology courses to apply an anthropological lens to an everyday object. Something you’re just used to looking at. The idea is to be able to situate objects within their cultures. It’s the beginning of your training as an anthropologist.

One such object is this weird stringed instrument I had laying around my house. I thought it was cool. It was $3 at a yard sale and made for a cool bit of decor. Lets take a look at this thing

But this isn’t just a wall ornament. It’s a bit beat up. But it is…or at least was, a functional instrument, even if not a high-end one.

The head on the body is skin, with a bridge that’s held in place by the pressure of the strings–similar to a banjo. The strings are a mix of gut and nylon, presumably because many of the original gut strings had broken and been replaced. There are tied frets around the neck that are also alternating gut and nylon, likely for the same reason.

The body is stained to mimic rosewood, and the 15 tuning pegs are held in place by friction, similar to a violin. There are no geared tuning machines like are found on a guitar. The entire thing is about 18″ long.

Perhaps most impressive is the amount of detail work. The inlays are beautiful, and are made out of wood and either bone or ivory. The variation among them suggests that are clearly hand-carved. 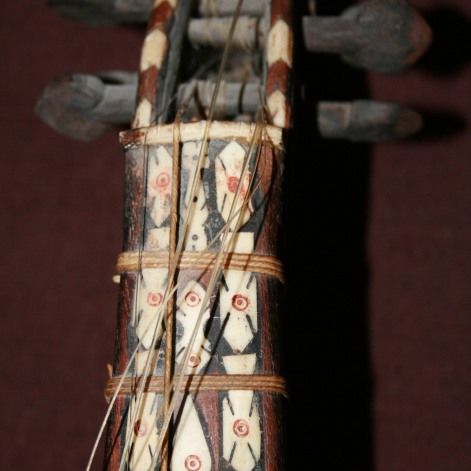 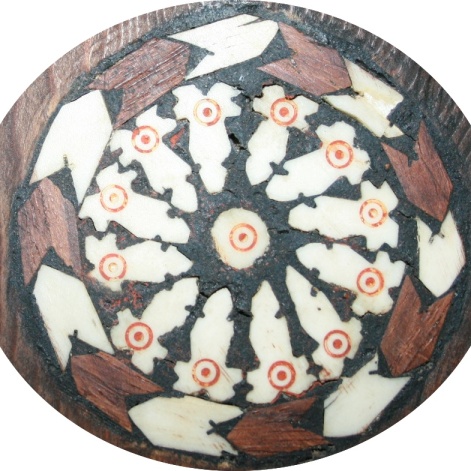 All of these inlays were incredibly labor-intensive

The fretboard alone has a total of 63 inlays! The headstock is equally ornate, with what appears to be a fleur-de-lis:

I researched what this instrument could be, and reaching out to Oud and Saz Restoration in Berkeley, California confirmed that this is a rebab, a kind of short-necked lute. Likely Afghan. The tiny size of it suggests that it was built as a tourist item, despite being a functional instrument. The replacement of several strings over time suggests that it was actually played.

The rebab is a stringed instrument dating as far back as the 10th century in its current form (Rabab)—the term rebab was first used in the 9th century to describe a slightly different instrument. There are two types of rebab commonly described—the kabuli rebab and the dhrupadi rebab. This instrument is an example of the former. It is also referred to as the short-necked lute, and is one of the national instruments of Afghanistan.

The apparent fleur-de-lis in the headstock may very well be the a lily flower, which is culturally significant in Afghanistan. As the fleur-de-lis is a stylized depiction of a lily in French culture, it may be coincidence that the two resemble one another. Additionally, the bird inlay may be representative of the magpie, which is a culturally significant bird in Afghanistan and which resembles the inlay when fluttering its wings.

It’s traditional to construct these instruments out of mulberry wood, which is then darkly stained–as this one was.

This was just a thing hanging around my house. I thought it was neat. But like everything around us, it doesn’t exist in a vacuum.  This instrument tells the story of the evolution of music in the Middle East, of the rich cultural history of Afghanistan. It also tells the story of a culture being adapted to accommodate the arrival of other people from around the world.

The story this thing has to tell is worth far, far more than the $3 that was paid for it.

What do you have just lying around that has something to teach you?

Instagram trimmed the captions but hopefully you can all follow along.
Went to @rwpzoo for the first time since #pedalforpongo and saw lots of old friends.
Linguistics time!
Tiktok has been pretty great for short little blippy stuff like this. If you’re on there, follow me @anthrospin.
Getting back into research that’s been on hold due to covid. I’m gonna be picking through materials and sharing tidbits like this one as my brain works on not being smooth anymore.
My settings say this video was supposed to save with captions. It didnt. But I’m still excited about #lumafusion video editing app
Loading Comments...
%d bloggers like this: